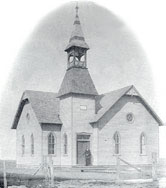 The history of Hope Reformed Church began August 24, 1892, when twenty-four people petitioned the Pleasant Prairie Classis to be organized as a congregation of the Reformed Church in America. The first place of worship for this new congregation was in a school house one-half mile north of the present church site. In the eighty-eight years of her history, the original church building constructed in 1894 underwent several major remodeling projects; and the parsonage was remodeled and then enlarged, and in 1954 a completely new house was constructed.

Many of the early settlers who moved into the George, Iowa area immigrated to the United States from Ostfriesland, Germany, a province located in the northwestern part of that country. The Reformed Church was no strange denomination to these people, but a continuation of the religious heritage they knew in Germany. The Pleasant Prairie Classis was comprised of about eleven churches whose members were of the German descent. The early church served a two-fold purpose: it provided spiritual nourishment for its members, and it helped them make the transition to this country by teaching them the new language. These early settlers spoke a German dialect called Low-German (or Plaat Deutsch), and even today the language can be spoken by many members of the church and is often heard among the older residents of the community.